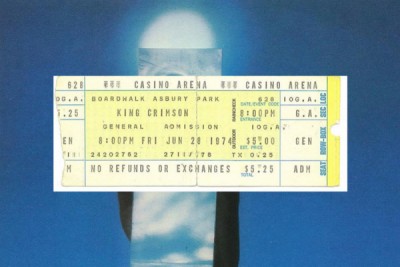 On this day 46 years ago King Crimson played to a half-empty Casino Arena in Asbury Park, New Jersey on a wet and windy night with Golden Earring as the support act.

Crimson had been touring in the States throughout April and May and by the time they arrived in Asbury Park they were road-tired, from a run of consecutive dates that had begun in San Antonio on June 4th, and was due to end in New York just three days later on the 1st July.

It’s hardly surprising that personal relationships within the band at that time were sometimes irritable and strained. 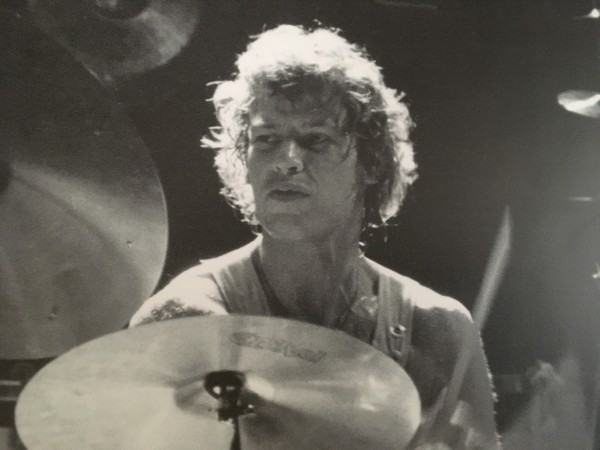 Remarkably, however, they were absolutely at the top of their game musically. Whatever interpersonal drama was simmering below the surface, once they got out on stage something very special happened.

The show opened with a truly brutal Larks’ Tongues In Aspic Part II. In 2001 when he was remastering the USA album, Fripp noted of this particular track, “If I heard a young group today playing this, I'd be impressed.” They followed with Lament and Exiles but then the show veered off the formal setlist as they embarked on an improvisation.

Bruford performs a typically crisp snare roll, laying down a wonderful groove. Six seconds in, Fripp can be heard shouting “F!” across the stage. A couple of beats later the bass grunts, the guitar growls, and the band takes a collective leap into the unknown. Years later, those who saw the performance, and the many more who heard it on USA, marvel at what is widely regarded as one of the finest moments of King Crimson in any incarnation. 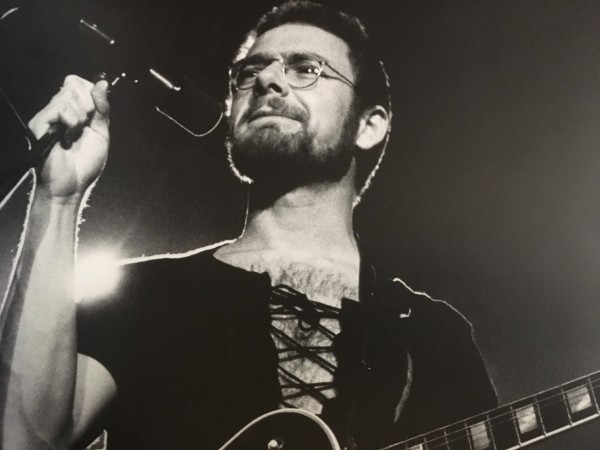 Listening to the improvisations from 1974, one becomes aware of distinct areas the improvisations fall into, not exactly a map but there are recurring motifs and moods. Were these consciously worked at or allowed to develop on their own? “You work with these musicians and you have some sense of how they might respond in a certain situation,” offers Fripp. “Then you have Asbury Park – ‘F!’. All right, what are you anticipating might happen after that? Where is that going to go? Well, all you know is it’s going to begin somewhere around F and then, who knows? So you’re working with these characters; you know the areas they are likely to move to, and then sometimes it goes somewhere else. That’s what it is, and sometimes it moves towards a formal structure that can be formalised in a piece – or not.”

In those moments, Cross believes they were operating around the rawer edges of how music is constructed. “If you throw the rules out of the window then you do start to come up with ways of talking about music in the way that we used to; starting with big bangs, steady climb-outs, fade-outs, or cross-fades. We were talking about music in rather general terms because we didn’t have any specifics mapped out. When I’ve endeavoured to walk down anything like a similar road with musicians since they’re terrified of doing that, or if they do, they can’t play a tune. Somehow we could see the value in playing tunes, singing songs, and, at the same time, exploring anything else that was around or came to mind. It’s dead lucky that we were able to do that. Considering how young we were, it was quite extraordinary really.” 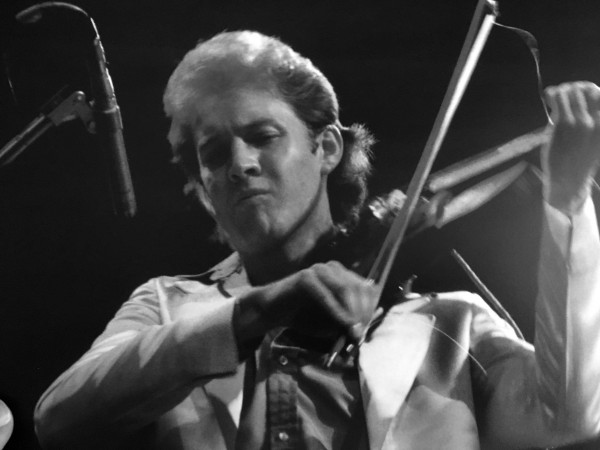 “There was an undeniable force with that band. It was not any one individual. It was the whole band,” suggested Wetton. “I can’t tell you because I was on stage, but I think if you were standing in the audience you would feel this raw wave of power. It was just a kind of attitude really, a big attitude coming off stage at you. What people forget is that when they think of King Crimson they tend to think of balladic, Mellotron-led stuff. Actually, by the time we were doing Red and on the road, it’s fucking metal – sheet metal coming off the stage at you.” 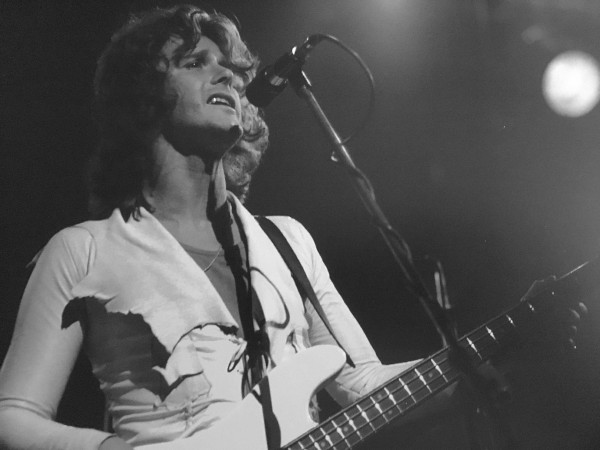 The tour that was meant to break them commercially in the USA ended up breaking the band. After their return from New York, David Cross was sacked from the band and the remaining trio entered Olympic Studio to work on what would be King Crimson’s final studio album of the 1970s.

In 1975 Wetton and Fripp met to assemble a posthumous live album at Olympic Studios. After a day sifting through multitracks taken from the backend of the tour, the bulk of what became USA was taken from the Asbury Park gig. 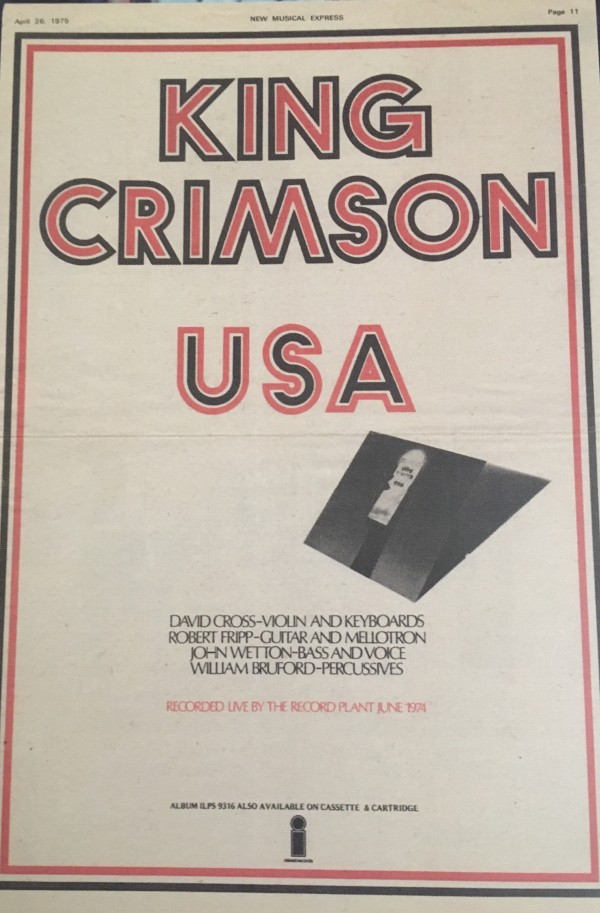 Over the years since USA's release the legendary stature of this gig has grown, with Asbury Park frequently cited as a truly classic example of that Crimson’s capacity to channel remarkable music out of the air. It wouldn’t be until November 2005 and the launch of DGMLive with the Asbury Park show available as the very first download on the site that fans finally got to hear what happened after the USA version cut out. 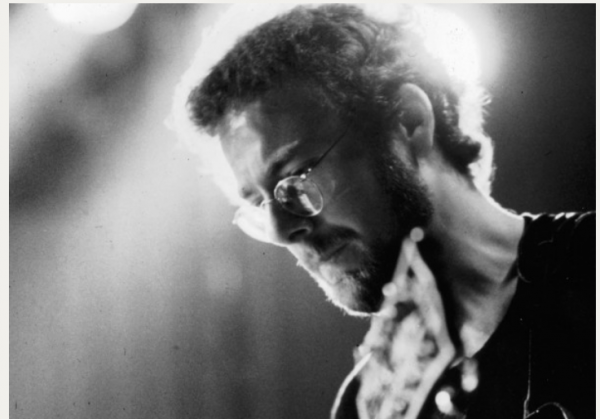 You can download the full Asbury Park concert here...

I don't know anything about the band or its music but I loved this title.

The Crimson Jazz Trio will be performing on Monday, June 5th at 8:00pmon the main stage in Rodney Square at the Clifford Brown Jazz Festivalin Wilmington, Delaware.

No prizes other than being a DGMLive clever-clogs but who said this when asked about their music back in the 70s? "There is so little truth in rock music.

No, not a label change but a report back from Fripp & Fripp's recent talk in Washington.

Versions Of The Truth

The creative life escapes a timeline, while also appearing on the list of things done, achieved,...

Quiet Moments in the...

When I Fall In Love

The sessions for Red saw the return of guest musicians joining the band in the studio, a practice that had been...