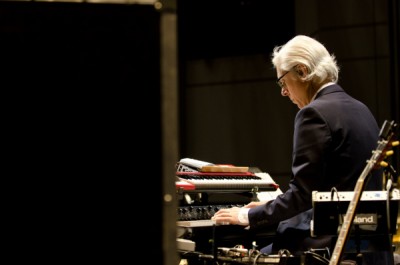 For those of you that have tired of Christmas songs we have Bill Rieflin’s playlist for you today:

The Following was written in response to a request from Iona Singleton.  I’m sure she’ll be sorry she asked.

During our stay in Poland, I listened frequently to Tokiko Kato’s versions

of the only Polish music I have.  Sung in Japanese, of course.  The record is called

Mitosci Wszystko Wybaczy (although it's a misspelling of the Polish):

As i write this, I’m listening to Hanka Ordonówna’s version of Gdy Jesień Się Zaczyna on yootoob.

I don’t know a lot about this record and I’m the only person who seems to own it.

I’ve looked for it in Japan, but it doesn’t appear to exist.  I got it from a man in

Chicago, over 30 years ago.  The piano on the record is immaculately played by Ryuichi Sakamoto.

Segueing into Germany, I am inexorably led to Kurt Weill -

mostly, his music from the early 1930s - the Bertolt Brecht collaborations.

I have two versions - one sung by Ute Lemper, another by Julia Migenes.

Neither is perfect, but I like both for different reasons.  A combination of the two would be just right.

This music was written in Paris, in 1933, after Weill & Brecht fled Germany, smelling the writing on the wall:

Brecht’s work had already been banned, and Weill was Jewish.

The main musical theme of Die Sieben Todsünden is based on a whole tone scale,

in case anyone was wondering.

Listening to this music usually brings me to Hanns Eisler, and in this case, it does.

Dagmar Krause made a record of Eisler songs in 1988 for Island records, called:

Four or so years after its release, I met the man from Island who got that record made.

While in Vienna, on the morning we shoved off for Prague, I found a music shop where I

bought the score of Eisler’s Hollywood Songbook.  I spent much of that drive reading through it.

Some of the music I know; most of it not. Coïncidentially, Jeremy Stacey & I both enjoy a particular

record of Eisler & Weill music by the Australian singer Robyn Archer.  I listened to that too.

On the flight from Essen to Vienna (according to 'Recently Played’ in iTunes) I listened to:

4) The Hazards of Love (The Decemberists).

It’s a record I’ve spent a lot of time with.  Possibly, the best thing about it is

the songwriting & the vocal performances.  In 2009, while touring with Robyn Hitchcock,

we opened for The Decemberists on a few East Coast shows - one at Radio City Music Hall.

They played the entire 'Hazards' record.  I wasn’t familiar with it at the time,

and I didn’t get to see them much (after playing, I was usually done in.  I could,

however, hear them from the dressing room and the music caught my ear).

It’s a shame because for as much as I love this record, I would like to have heard it live -

particularly because the singers Becky Stark & Shara Nova were there.  Robyn Hitchcock

played on the record too, but I don’t remember if he performed with them on that tour.

Speaking of Robyn Hitchcock, when Iona suggested that KC members

mocked that mine was going to be full of only things I played on.  Well, in this case,

he’s semi-correct (rather than being generally & incessantly wrong).  Somehow, in my listening,

I was associatively led to listen to two Robyn Hitchcock & the Venus 3 records:

I haven’t heard these for a long time; quite possibly, I’ve never heard either in their entirety.

It’s easy for me to be critical of these records, but there are lotsa good things about them.

Foremost is Hitchcock’s strength as a writer.  And much of the writing here is good.

Another thing I was surprised by is that, overall, I like my drumming on these records.

means that they fit the songs well.  Unfortunately, the mixes don't capture the

power & intensity we used to achieve onstage.  I don’t think any of the songs had been

performed live prior to recording them, but I might be wrong about that.  Listening to these records

reminds me that we were a very good band.  The records only hint at that.

I’m not sure if this counts, but somewhere along the way I wanted to hear:

but I don’t have it with me.  I went to a music shop in Vienna,

but they didn’t have it either.  If I'd had it, I would have listened to it.

It’s probably my favorite of his records.  I did, however, listen to

a few songs from the Murder Ballads record, including Stagger Lee.

‘Recently Played’ says I listened to a few tracks from my favorite Kip Hanrahan records:

Vertical’s Currency is really the one for me, although Desire... has one

And Pleads His Case (with pathetically hilarious lyrics, given the title).

It was introduced to me by my friend George Romansic, a drummer,

who died early 2015.  George loved music and knew far more music than I ever will.

When I first heard Her Boyfriend…, my life changed.

There isn’t a lot of music that does that.  At least, not for me.

Vertical’s Currency is, in a way, a better version of Desire Develops An Edge.

and Jack Bruce, singing and paying bass.  David Murray on sax is fabulous.

One of my favorite records ever.

8) Sunshine Of Your Love (in mono and stereo!).

There is a lot about this song that I love and that is interesting.  For instance,

the song is in D.  Which is weird because you would think a heavy rock riff

like that would be in E.  I like that Jack and Eric trade vocals; it’s an interesting choice.

There is no backbeat in the drums - another interesting choice.  And, of course,

Clapton begins his guitar solo by playing Blue Moon.  As a bonus, my misheard lyrics are better

than Pete Brown’s (e.g. I hear “dull surprise” instead of “dawn surprise,” making it much creepier).

No list of music can be complete without something from The Beatles.  Somehow, I wound up at:

until the catalogue was rehabilitated in the ‘80s.  I first got this record for my eighth birthday,

given by my grandfather.

Later that day, David Singleton (Manager/Minister) said he saw me listening to this song

and began running it in his head.  He marveled at the lyrics and wondered how Lennon had gotten there.

Finally, just last night, a friend brought my attention to the song:

I like them both.  A lot.  Interestingly, Ronson took much from I’m The One

for his first solo record, Slaughter on 10th Avenue - including Annette's arrangement

of Love Me Tender, and her songs I’m The One, and Seven Days.

Mike Garson played piano on both records.  The Crimson Konnection here, as many know,

is that Annette sang on Bill Bruford’s first solo record Feels Good To Me.

Ronson played on that record too.

Having been asked to limit my list to ten items, I’ll skip over my other recent listenings.

I notice that most everything on this list is really old.  Ain’t that a shame, shame, shame.

Talking tuba and much more

Robert gets excited when Santa arrives in town and the Christmas lights go on, rocks out a little in...

Robert is At Home, reporting on his pitiful stature as a human being, demonstrating the production...

Autumn in the garden, getting ready for Christmas, guitar practising, and more... Premieres today,...

There is a difference between knowing, that Music is always present and available, and realising it....

In The Court Of The Crimson King: King Crimson At 50 - a film by Toby Amies - will be screened in...